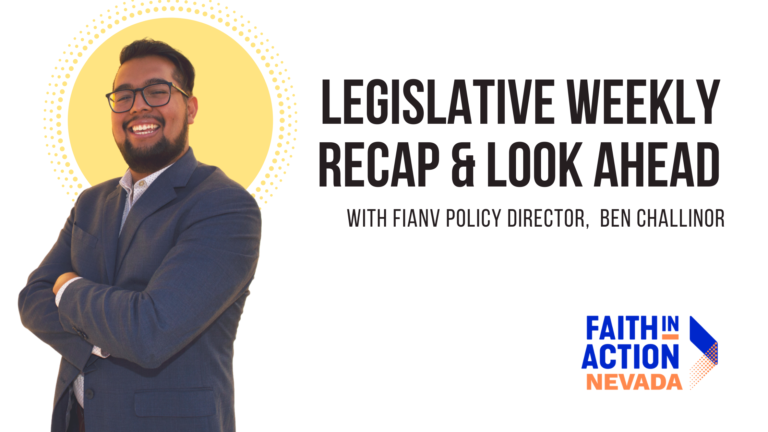 Welcome to the 12th week of the Nevada Legislative Session! We have reached the halfway point of legislative steps with 39 days left to go. We just made it through the first house passage, where bills had to pass out of their house of origin in order to move forward. The next deadline is the second committee passage on May 14th.

The next step in the legislative process is what happens in the second half of passage. Bills have been voted out of their house of origin and are now going to the second House. Senate bills are going to assembly and assembly bills are going to the senate. They will be heard by different committees made up of members of the opposite house. Sometimes bills will go to the same committee and sometimes they won’t. For example, SB218 was heard in the Senate Judiciary but has been referred to Senate Commerce and Labor. They have until May 14th to hear the bills and then pass them out. If they get passed they have the options of due pass or making an amendment and passing it out amended. Because deadlines got extended due to COVID-19, they have a lot less than 60 days (the number of days they are supposed to have) even though this is the halfway point.

You may have noticed many bills received exemptions. This is due to these bills requiring money from the state. On May 4th is the economic forum. This is where they look at revenue coming into the state, and build the budget based off of that. The final budget is based off of this Economic Forum in May. If there is any bill that costs the state any money then they have to go to finance or ways and means (the money committees). The budget has to be closed before they can do anything with these bills. This usually does not happen until the second to last week of session. These bills have been given exemptions since they have to go through this process before they can be passed.

Remember to help us support these bills mentioned by going to this website. You can also join our Digital Activation Team or Rapid Response Team  to help us out even more and stay up to date on what is happening with these bills, or join our Organizing Team to engage legislators. All the information is on our website along with all our Legislative priorities which are now available for you to look over here. Thank you for being a part of this journey through the Nevada Legislative Session with us, and stay tuned for more updates next week!